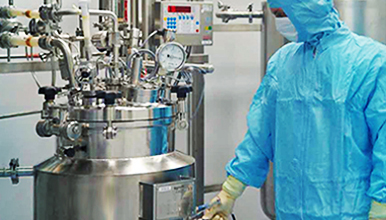 NPO Petrovax Pharm is a leading research and manufacturing company in Russia, producing pharmaceuticals and vaccines. Interros acquired a controlling stake in the company in 2013.

The company was founded in 1996 by a team of Russian researchers to develop, produce and commercialize original innovative pharmaceuticals.

The company’s main areas of focus are manufacturing flu vaccine to meet the national immunization calendar, and developing and producing immunobiologicals and long-acting nanobio drugs.

The company’s product line consists exclusively of innovative drugs and vaccines that NPO Petrovax Pharm successfully markets in Russia and the countries of the CIS and the EU.

History
2013
13.3 mln doses
of flu vaccine supplied to Russia’s regions
In accordance with the National Immunization Calendar, NPO Petrovax Pharm supplies 13.3 mln doses of Grippol® Plus vaccine. The primary vaccine recipients are the regions in the Far East Federal District that had experienced flooding: Khabarovsk Kray and the Amur and Jewish autonomous regions.

The company begins work on a new development strategy. At the end of the year, Interros Holding enters into an agreement with NPO Petrovax Pharm to acquire a controlling stake in the company.
More
History
2014
16.9 mln doses
will be shipped to regionals with framework of the National Immunisation Schedule
The company of Vladimir Potanin, founder of the Interros Group, finalizes the acquisition of the controlling stake in NPO Petrovax Pharm, a Russian pharmaceutical company.
More
History
2015
>20 mln doses
vaccines against flue and pneumococcus Petrovax will produce in 2015
Will be shipped to regionals with framework of National Immunisation Schedule.
More
History
2016
Localized production of the Grippol® Plus flu vaccine in Belarus

More
History
2019
RUB 1 bln per year - export volume to 11 countries
At the beginning of 2019, Petrovax sums up its results. The export volume reached 1 billion rubles in 2018. Export’s share in the sales structure amounts to 11.8%. In 2018, the company further continued to export its products to the EAEU, EU countries and Iran.

In March, Petrovax won the «Russian Business Guide. PEOPLE OF THE YEAR» award in the  "Pharmaceuticals" nomination for its contribution to the development of the Russian economy and active entrepreneurship.

At the beginning of April, at the INFLUENZA VACCINES FOR THE WORLD - international conference on influenza prevention held in Edinburgh - world experts evaluated the efficacy and safety of Grippol® vaccines with the Polyoxidonium adjuvant. The European independent FluConsult Company confirmed the data on the mechanisms of action of Polyoxidonium in the vaccine, previously provided by Russian researchers.

In June 2019, Petrovax confirmed the compliance of the production and Quality Management System (QMS) with EU GMP rules. The certificate was issued following an audit conducted by the State Institute of Quality Control of Medicines (SUKL, Slovakia).

In July, Petrovax received permission to commission the second production building in the urban district of Podolsk, Moscow Region. The new building includes two production lines for the manufacturing of substances, solid, soft and liquid finished dosage forms. More than 1 billion rubles were invested in its construction.

In August, the company launched Velson® - a state-of-the-art medication for sleep normalization and arranging human biorhythms.

In October, Petrovax completed on schedule the supply of the Grippol® Plus vaccine to the national market and the EAEU countries. In anticipation of the 2019-2020 epidemic season, the company isupplied more than 8 million doses of the Grippol® Plus vaccine for the Russian commercial market and for export. The company exported towards Belarus, Kazakhstan, Kyrgyzstan and Uzbekistan more than 6 million doses of vaccine.
More
History
2020
> 8 mln doses of influenza vaccine
delivered on the eve of the 2019-2020 epidemic season in Russia and abroad.
History
2021
394 patients from Russia and Slovakia
took part in the Polyoxidonium®️ study for the treatment of COVID-19
History
2022
For 20 years
Received a patent for Longidaza®️ in India
Overview
NPO PETROVAX PHARM TODAY
NPO Petrovax Pharm is a leading research and manufacturing company in Russia, producing pharmaceuticals and vaccines. NPO Petrovax Pharm brings its research developments to full-scale manufacturing in its state-of-the-art high-tech biopharmaceutical plants. The company’s manufacturing is in full compliance with the GMP EU and ISO:9001 international standards. The company’s product line consists exclusively of innovative drugs and vaccines that NPO Petrovax Pharm successfully markets in Russia and the countries of the CIS and the EU.
More

22.07.2020
International Clinical Trial Of Polyoxidonium Confirms Its Safety For Covid-19 Treatment
A Russian original medication called Polyoxidonium® by Petrovax, a pharmaceutical company affiliated to the Interros Group, has passed the first phase of an international clinical trial for its effectiveness and safety for COVID-19 treatment.
More
News

17.04.2020
Petrovax to Test Polyoxidonium for Covid-19 Treatment in an International Clinical Trial
Polyoxidonium (azoximer bromide) - the Russian original drug produced by Petrovax-  was approved by the Ministry of Health of the Russian Federation for conducting an international clinical trial for the treatment of COVID-19.
More
03.12.2018
Petrovax Pharm’s «Polyoxidonium» to Become the Winner of the Russian Pharma Awards
The first place in the nomination «Medicine of choice for the treatment and prevention of SARS and influenza among children» was granted to «Polyoxidonium», produced by NGO Petrovax Pharm.
More
Events

21.11.2013
ACQUISITION OF NPO PETROVAX PHARM BY THE INTERROS GROUP
Interros Group is acquiring a controlling stake in NPO Petrovax Pharm, a Russian pharmaceutical company.  The parties signed the documents in Moscow today. Arkady Nekrasov and Natalia Puchkova, NPO Petrovax Pharm founders, will retain a stake in the company, and will continue to participate in business management. Financial terms of the deal are not disclosed.
More