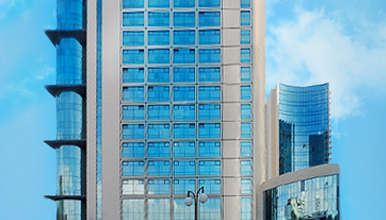 The Ministry of Sport, Tourism and Youth Policy of the Russian Federation, the Russian Olympic Committee, the Sochi 2014 Organizing Committee and the Interros Holding are the cofounders of the University. President Putin attended the University’s opening ceremony on September 16, 2013.

RIOU is a unique higher education institution that transforms the knowledge gained during the Olympic Games into educational products. The experience gained fr om organizing sports events on the scale of the Olympic Games provides a clear understanding of the modern management practice algorithms.

In 2010 the RIOU embarked on over ten educational programs under the contract with the Sochi 2014 Organizing Committee. Since 2011 the University has been running continuous education programs for Russia’s regional sport managers, Olympstroy staff and Sochi municipal employees.

The RIOU has symbolic meaning as a project – it embodies the Olympic Games legacy. The University’s well-trained graduates will be in demand by Russian national and international Olympic and Paralympic movements, state and municipal bodies, sports clubs and federations, sporting goods manufacturers and sports marketing companies.

The RIOU faculty includes well-known Russian and international experts in sports management. The University has been developing a network of partnerships with the leading universities in Russia and other countries. Among its partners today are the Moscow University of Industry and Finance, the Academy of the International Paralympic Committee and the Academy of International Sport in the UK, the Olympic Studies Center at the Autonomous University of Barcelona in Spain, the Kufstein University of Applied Sciences in Austria, and the Capilano University in Canada.

The University launched its own publishing operations in 2011, now producing a quarterly popular science RMOU Vestnik magazine and a series of books which include memoirs, archival materials, research on the history and philosophy of the Olympic movement and the best Russian and foreign textbooks on the various aspects of sport education.

On October 21, 2009 the cofounders of the Autonomous Non-Profit Organization Russian International Olympic University held a meeting at the Ministry of Sport, Tourism and Youth Policy, wh ere they made an official decision to create the RIOU. The Ministry of Sports of the Russian Federation, the Russian Olympic Committee, the Sochi 2014 Organizing Committee and Interros became University cofounders.

The Ministry of Justice of the Russian Federation registered the RIOU on December 24, 2009.

The first official announcement about the founding of the University was made in Vancouver on February 25, 2010 in the presence of Alexandr Zhukov, Deputy Prime Minister of the Government of Russia, Jacques Rogge, the head of the IOC, Dmitry Chernyshenko, the President of the Sochi 2014 Organizing Committee, Prince Albert of Monaco and Vladimir Potanin, the President of Interros and the Chairman of the RIOU Supervisory Board.

The International Paralympic Committee, the Sochi 2014 Organizing Committee and the RIOU signed a Memorandum of Understanding on June 11, 2010. The Memorandum was signed at the 2010 Conference, which was designed to disseminate lessons from the 2010 Olympic Games, wh ere the last day was entirely devoted to the Paralympic Games. Xavier Gonzalez, chief executive officer of the International Paralympic Committee, Dmitry Chernyzhenko, the President of the Sochi 2014 Organizing Committee and Ivan Linkov, the RIOU Director General attended the solemn ceremony. The parties agreed to implement Sochi 2014 Excellence Educational Program. The organizers of the next Winter Games will train at the RIOU. The Olympic Committee is planning to adapt the program to the Russian realities and enrich it with its own material.


The University building opened on September 16, 2013 in the presence of the President of the Russian Federation Vladimir Putin.

The RIOU manages the exhibition and other activities of the Vladimir Potanin Olympic Collection, one of the largest private collections of Olympic artifacts.
The collection is part of not only the Olympic movement, but also is the cultural heritage of the world, it covers all the modern Olympic Games - from the first Olympics in 1896 in Athens to the present day. The collection includes about 400 items from different years: award and commemorative medals, diplomas, badges of honor, cups, statues and torches of Olympic torch relays.

WHAT IS THE PURPOSE OF THE UNIVERSITY?
The RIOU’s primary goal is to prepare experts of the highest caliber in sports management and for the sports industry. University alumni will work to build up high achievement sports, the Olympic and Paralympic movements, as well as mass sports and athletics.

There are currently approximately 500 educational programs in sport management in the world, of which only 8 are in Russia, which is clearly inadequate for our country’s needs.

The RIOU became the training ground for the Sochi 2014 Organizing Committee. The Olympic Games is currently the largest athletic event in the world, requiring hundreds of different organizing functions to work together.

The RIOU is an important element of the legacy of the Olympic Games. It allows us to position Russia and the city of Sochi as a platform for multilateral dialogue between experts and for multilateral cooperation in the area of international practices in humanities, innovation in sports and education.

WHAT SUBJECT MATTERS WILL BE TAUGHT HERE? IS THIS A TRADITIONAL HIGHER EDUCATION INSTITUTION OR A GRADUATE SCHOOL?
The RIOU will focus on three main areas: education, research and consulting. The University will run graduate programs, a program roughly equivalent to an MBA or an Executive MBA, and also offer continuous professional education classes.

The RIOU will focus on majors that are in demand by the Olympic and Paralympic movements in Russia and around the world. What sets the RIOU apart is that it will work closely with the International and National Olympic Committees.

WHAT INDUSTRIES WILL HIRE THE RIOU GRADUATES AFTER THE SOCHI OLYMPICS AND WHERE WILL THEY FIND EMPLOYMENT OPPORTUNITIES?
Anywhere where there is a need for sports management professionals, such as municipal and state government services, athletic federations, sports clubs, athletic facilities, institutions of higher education, sports media, sporting goods manufacturers, sports marketing companies, etc.

The list of sports industry majors is dozens of entries long. One area of focus is working with the Russian national and international Olympic and Paralympic movements.

The University campus will include the largest conference hall on the Black Sea shore with the capacity to fit over one thousand people, as well as a unique Olympic electronic library, the only one in Russia.

Sochi residents and visitors will be able to enjoy watching sports and other events broadcast on the screens on the front of the University’s educational building using the latest technology.

Environmental norms will be strictly observed in building construction and operation. All University buildings will be fully handicap accessible.

WHAT INFRASTRUCTURE IS PLANNED ON CAMPUS (HOTELS, FOOD AND DRINK, ENTERTAINMENT FACILITIES)?
Students, faculty, staff and visitors will have access to everything they may need to study, conduct research and relax.

They will also have access to modern lecture halls, equipped with the latest technologies, hotels, multifunctional conference and seminar hall, a universal sports and health facility and university’s own food and dining center. The University does not plan to have any entertainment facilities on campus.

WHY WAS THIS PARTICULAR PART OF SOCHI SELECTED?
The central part of Sochi has the best transportation and communication networks, able to best accommodate students, faculty and visitors who will come to attend conferences, forums, cultural and sporting events that the University plans to host.

With its technological capacities and educational potential, the RIOU will become the city’s new cultural attraction.

HOW MANY PEOPLE WILL TEACH AT THE UNIVERSITY? WHAT ARE THE SELECTION CRITERIA?
Under the plan, there will be between 40 and 50 professors and instructors. Many instructors will be invited to teach short courses, a tried and tested practice common worldwide.

The main criteria used for selecting faculty include professional degrees, experience and satisfying the RIOU’s requirements for the content of the educational process. The RIOU is interested in inviting the faculty of the Sochi and Krasnodar Higher Educational Institutions as instructors.

WHERE WILL THE NON-TEACHING EMPLOYEES BE SOURCED?
Servicing the university’s multifunctional buildings will require sizeable technical staff.

All else being equal, Sochi residents will be given hiring preference. Candidates must be highly qualified.

HOW MUCH WILL BE INVESTED IN THE CONSTRUCTION AND HOW SOON WILL IT TAKE TO RECOUP THE INVESTMENT?
The RIOU is paid for by Interros, one of its co-founders.

The investor spent approximately $150 mln of its own funds to build the RIOU’s educational and administration building. Three hundred fifty million dollars in borrowed funds (a Sberbank commercial loan) have been invested in the construction of hotels and recreational facilities.